A short note on housing in Cornwall

During a recent trip to the north coast of Cornwall (more specifically the area surrounding Polzeath and Padstow) I was struck by the level of modern design being implemented in the construction of residential properties there. In many cases these houses could simply be described as 'new' or 'contemporary' but are markedly different to the typical housing designs utilised across the UK by volume-house builders. The houses, generally, make use of local materials (slate, stone) with render and timber, simple geometries that evoke the more traditional pitched-roof forms of housing in the UK, and also feature extensive areas of glazing and careful detailing. 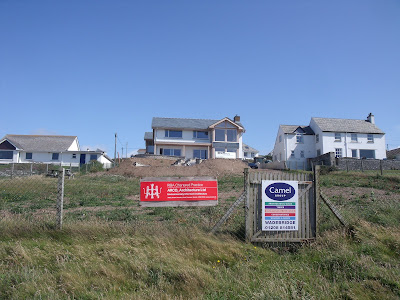 The reasons for the apparently wide spread use of 'new' architectural styles, as opposed to the kitsch re-imaginings of past architectural styles (such as mock-Tudor), could be anything from the fact that property prices in the area are considerably higher than UK averages, the climate may be better suited to it or more 'enlightened' planning officials, clients, builders, etc. It could be that there is fewer of the 'other' styles to reference although there are obviously considerable areas of Cornwall (and this area in particular) that have buildings of historic values in other styles. When these houses are seen in the picturesque setting of the north Cornwall coast line arguments that modern or contemporary architecture are unsuitable for anywhere but dense urban locations clearly don't stack up. It is as much about the visual quality of the design as it being representative of that time. 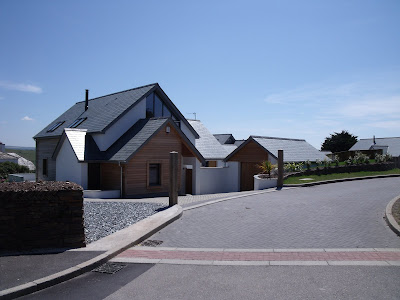 The reason I wanted to raise this point, albeit in a short post, is that over the past 12 months I was involved in trying to get planning permission for a small collection of residential dwellings for a small-scale developer in another rural area of the UK. The ambition from the developer was to build houses to a similar style and quality to these 'new' dwellings I saw in Cornwall but came up against opposition from the local authority. Without looking to go into the nuances of why or why 'contemporary' design was deemed appropriate in that situation I only wanted to bring attention to the successful application of the 'contemporary' and my belief that this needs to not be the preserve of certain enclaves but taken up across the country.
Newer Post Older Post Home