The winter school programme tasked students to address the idea of a School being used as a tool for social and urban transformation in urban centres - School +. Central to this was the arguement that schools are one of the few instruments available to governments, commmunities, architects or other interested parties but that relevant examples are lacking, particularly when new town building in certain parts of the world have only been concerned with aesthetic issues. Student teams were challenged to move beyond simple 'social engagement' as an add-on to an existing brief and to start from 'first-principles' to fully challenge the programme and meaning of both "school" and "+". This new emphasis on the social role of architecture (and architects) can be seen as a reflection within a wider professional shift as a response to the economic downturn of 2008 (see for example Notes on Metamodernism). The following project deals with a Secondary School building in the Vedado district of Havana, three other student projects dealt with the same brief whilst five tackled a Primary School in Centro district.

Currently serving as 2200m2 of car park, the Vedado site was situated adjacent to Calzada street, a corner plot of the city block between Calle L and K. The wider area is framed by buildings and places with both high architectural and social value, including the Office of Interests of the United States of America, the Camilo Cienfuegos Hospital, Anti-Imperialist Square José Martí and the Sport Center José Martí as well as being closely situated to the Malecon. By far the most challenging charateristic of the site however is the fact that it is at high risk of sea penetration, with penetrations of 1.2m or more an annual occurance. Other environmental considerations to contend with include the south and south-west orientation, meaning that it is not shaded by adjacent buildings (a scenario often desired for the cooling effect it brings), and that the existing residential blocks surrounding it reduce the direct impact of the sea breezes from the north-east. Furthermore it suffers from acoustic problems due to the close proximity of traffic (both vehicular and pedestrian) on Calzada.


Vedado is structued by a grid of 100m x 100m blocks that has been orientated 45 degrees of north-west and north-east to "diminish the effects of heatstroke and to take advanatage of the predominat sea breezes". The site represents a place where the dominant grid meets the coastal fringe. Local development regulations stipulate that 33% of the surface area of each plot must be left undeveloped and a series of codes enforce garden and 'green' strips. These, combined, with a network of parks that provide social spaces for residents, give the area a 'green' appeareance. The existing buildings show the damage of annual flooding and on the whole are 1950/60s orthognal, concrete blocks. Calzada breaks the coherence of the Vedado grid, creating a triangular shaped park that has become a scene of conflicting emotions. The presence of Havana's main Funeral Home opposite the site and the close proximity to the United States Interests Section building mean that the park has become a place of gathering for people experiencing a range of human emotions - from joy (at being offered emigration to the US) to great saddness (rejection and mourning). In the evening the park becomes the social meeting point for the local community.

The programme for a standard secondary school set out requirements for a school that serves 270 students across three grade years (7th, 8th and 9th). These students would be taught in standard classrooms of 30 pupils and specialist learning activities would take place in supplementary spaces (science laboratories, art rooms, etc). Certain elements of the programme, including the Dining space and Library were obvious candidates for hosting wider social activities and opening the school up to the wider community. An early decision was made to combine these elements of the brief into one central multi-functional 'Heart' space. This central space would consist of adaptable spaces and break out areas with potential for it's services to function for 24 hours per day.
A rational analysis of both the site and programmatic issues also meant that an early decision was taken to lift the main elements of the school off of the ground and out of the risk of sea penetrations. Although this would only require raising the building up by 1.2m by lifting the school higher, by 6m, new spaces are freed up beneath that create new opportunities for future development as well as creating new social spaces that open up to the existing park.
The ability for the school to provide learning environments that suited the needs of Cuba's current education system and that were also able to adapt over time was a key element in driving the design. Cuba has seen rapid change in the way education works in recent years with an increase in technology in the classroom (with televisions, VCRs and computers) that is expected to continue. One of the largest criticisms of Cuba's current school buildings is their inability to adapt to these new technologies and new teaching methods.

The scheme was developed with the use of models. An initial area study in volumes was used to assess the impact of the scheme on the local environment, taking into account the opportunities from site constraints for new interactions.
These initial studies were then developed into a preferred option of three 'stepping elements' that was then tested more thoroughly over the two week programme.
Vision


Informed by a number of constraints on the site and acknowledging that the building will continue to grow beyond its completion date, the proposed Secondary School uses these constraints as opportunities for design, not barriers. The school becomes a new beacon in the community with a civic presence that is reinforced by being raised 6m above the ground. Materials and the use of vegetation should help to fully integrate the school into the wider community and become a tool for enacting social change.
Externally the building is wrapped in a brick screen, with the bricks laid to allow perforations to maintain natural air flow and offer glimpses of the activity taking place behind. The choice of red brick was made after examining the local area and the materials that weathered best in the sea air and withstood flooding, without drastically affecting the visual appearance. This screen also creates a controlled façade that addresses the two main roads adjacent to the site, expressing the irregularity of the grid in this part of Vedado.
The existing park is restructured to tie it in visually and psychologically with the new school and community facilities. A material change on the pavement and road surface helps to signify this link, without the need of rerouteing or drastically changing the road layout in the area. A series of new social gathering spaces, in the shade of the building above, compliment a new outdoor auditorium in the site's northern most corner that can become a new social gathering point with performances in the evening and at weekends hosted by the school or other community groups (there is also the potential for screening films or other events). Within this landscape sits the first element of the main building, an information point and circulation points that take students (and the community) up into the main functional spaces. Large sections of the walls pivot open to help draw people in. This point is designed so that in the event of sea penetrations minimal damage is done.
From a series of highly functional ramps the main school building is accessed. A simple diagram of three connected 'elements' can be read as one storey of specialist classrooms and administration (north/left) and three storeys of standard classrooms (south/right) that surround the central public functions (Library/Dining). A series of outdoor terraces greet students as they move up through the school and provide additional space for outdoor learning.
The main school element is lifted 6m above the ground, with three storeys of accommodation at 4m in height each, giving an overall height of 18m. The central element, a series of decks (with differing levels of screening for privacy, etc), is set 2m below the main 6m line so that new visual connections are created.
The three elements are structured to provide a degree of self-shading whilst they are not so close so as to over power or create restricted places. This stepping also helps to reduce the mass of the structure visible from surrounding properties. The openings also allow cross ventilation of the natural sea breezes to continue and not form a barrier to them.
The 'Heart' space, with shared functions, is designed as a socially active place that will visibly change through out the day as new activities take place. On the first deck is housed the dining area that can function as a cafe or meeting point. Above this is the library, with a secure book enclosed on two sides by moveable walls that can be opened up to allow easy access from the reading area. As users move up through this space the areas become more private until a roof terrace, shaded by a canvas canopy, is reached.

The standard classrooms are screened by the perforated brick façade and a 2m strip of outdoor space that features seats and areas of vegetation. This strip can be opened up to the classrooms with a folding wall that increases the teaching area and allows for natural ventilation and a private area of outdoor space for each classroom. These classrooms can be changed over time as learning methods change.
Potential exists between the structured grid of the columns for volumes to be appropriated by up to two floors in places, through light-weight, adaptable construction. The school remains above as a more visually static element although behind the brick screen it to is flexible. This approach recognises that cities change and grow over time, with users often appropriating space incrementally.
The use of 'V' shaped concrete columns can be read as a reinterpretation of the traditional colonnade that characterises so much of Havana. These columns also allow the required 5m of garden space (a Vedado building regulation) to flow under the building but the existing building line to be maintained.
The central element has a different structural expression, resting on concrete shear walls (that enclose the information point) and two slender concrete columns.
The overall form is designed to work with the existing urban fabric, respecting the existing building heights. The highest point of the proposal being opposite the Funeral Home, one of the most important civic structures in the area. 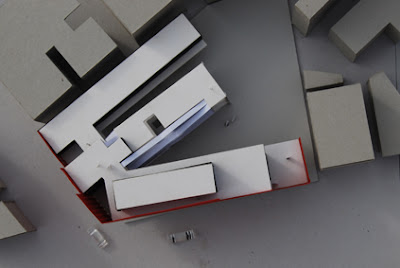 In summary then School + (and the Secondary School proposal) is not about architectural statements (genius sketches or image-making) but about a rational process that responds to and then informs the existing urban fabric. It is about new social agendas and architecture is only a vessel for that agenda. School + should not represent a school, it should be a school for today and for the future.
Newer Post Older Post Home